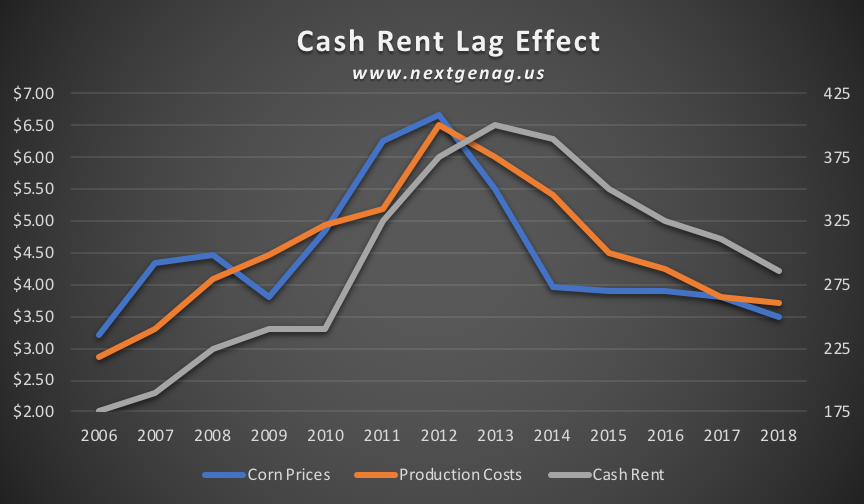 “Fifty-three percent of Iowa farmland is rented,” according to the Iowa State University Farmland Ownership Tenure Survey released in 2017.  A high percentage of these agreements are for a simple cash lease.  Yes, we agree a fixed cash rent lease is simple in concept, but can also present challenges.  We have experienced this ourselves while helping landowners and producers determine a fair rental rate in a volatile commodity market environment.  Our concern is this volatility may become more the norm and what steps can we make to plan for it.

One of our team members, Mike Downey, touched on this in the article “Shake Things Up On Your Operation” written by Betsy Freese with Successful Farming magazine.  One of the points Betsy made in her article is that sometimes uncertain times present the opportunity to rethink the way we have done things.  Downey was quoted to say, “One of the challenges with cash rents is the fact they lag behind commodity prices and farm income.”

This lag effect is illustrated in the chart below comparing the average price of corn, production costs, and cash rent.  As you can see average rents (grey line) lagged behind as commodity prices and production costs were rising just as rental values have been slow to adjust on the way down in recent years.  The fact that most rental terms are negotiated at one set time prior to the crop year is a large contributor to this lag effect.  Much can change in a year’s time.

CONSIDER A FLEXIBLE CASH RENT LEASE TO MINIMIZE THE “LAG”

Many university field specialist and magazine journalists have wrote on the need for flexible cash rents in terms of their fairness between all parties.  We agree, but if you dig even deeper what they really allow is the flexibility to adjust in real time with market fluctuations so no one gets caught on the wrong side of unfavorable price movements.

In the article noted above Downey was also quoted to say, “The challenge is you agree on a price at one given time during the year, but we’ve all witnessed the extreme volatility and the way commodity prices can change during one year. A flex lease can help minimize this lag.”

A flexible cash rent lease that can flex higher or lower due to prices and yields is worth taking into consideration.   Actually, many of our flex leases have resulted in a higher net rent versus what we would have agreed to under a standard fixed lease prior to the crop year.  We experienced this recently in the years 2015 through 2017 simply due to the record yields that have been harvested from many fields.  Typically, a producer is comfortable passing along a bonus payment if their yields are significantly above average or their average selling prices are well above their break-even costs.

One of the key components of a fair, long term lease is that it must be fair for all parties.  One of the tradeoffs for the landowner utilizing a flexible lease arrangement is the willingness to settle with a lower guaranteed “base payment” that may be 10% to 25% beneath the market “going rate.”  The potential reward is that their upside is left open to participate in any strong price or yield environments in the form of “bonus” payments.  The base payment is the part of the flexible lease arrangement that protects the producer against a poor year either due to disappointing yields or prices.  We all must understand the risks involved with growing crops and that we can’t keep producing record yields year after year, and this is where the concept of flexible lease has a place that can adjust in real time, instead of us adjusting to the market a year after the fact.

The unfortunate fact about flexible cash rent leases is that you will rarely find two in the industry that are structured the same.  This can be intimidating for some, but it shouldn’t be a deterrent.  This is where having a 3rd  party resource to oversee for the Landowner & Producer becomes important.  This was part of the founding vision for Next Generation Ag Advocates, along with our Century Match program that matches Landowners to Producers.  Please reach out if you’d like to learn more about our experiences with flexible cash rent leases and how we use them to support fair and long term relationships for your family’s farm.

Written by the team at Next Gen Ag Advocates.

8 Tips for Finding the Right Landlord