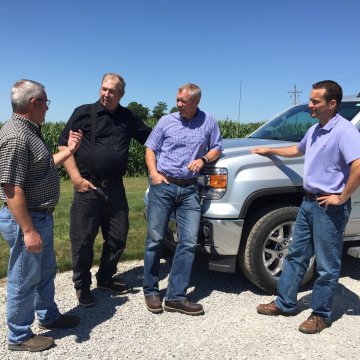 The corn crop around Lisbon, Iowa, this morning is on pace for record yields, but the four men gathered for a discussion are not throwing a party. Markets are down and agriculture is five years into a financial tailspin.

Helping farmers transition to the next generation is on the minds of Steve Bohr, Mike Downey, and Glen Moeller, who have combined their experiences to form Next Generation Ag Advocates (Next Gen Ag).

Dan Schurr, a farmer in LeClaire, Iowa, and board chairman of CHS, has joined the discussion today because he has taken over 900 acres of cropland from Moeller on a flex lease. This is the kind of transition Next Gen Ag hopes to help other farmers make.

Moeller, who retired from farming after turning over his acres to Schurr, says the pool of farmers who operate the land is shrinking, while the number of landowners is growing and transitioning at a more rapid pace.

Next Gen Ag’s Century Match program uses a database to match nonfarming landowners with prospective producers, and then it supports the relationship with a land management service.

“We take those two profiles and we match them. It is kind of like an eharmony.farmer,” says Moeller.

The goal is to be an unbiased party to help determine fair rental and lease arrangements and then to support a long-term relationship that lasts multiple generations.

Here are eight tips for making the right match on your farming operation.

1 MAKE SURE YOU REALLY WANT OR NEED TO EXPAND ACRES.
Schurr has a son who wants to come back to the farm, so he feels he needs to expand.

“Glen approached me about a transition plan because he didn’t have a successor to his farm,” he says. “We put together a plan that worked for both of us. He was the intermediary between me and his landlords, and he helped us with leases. Otherwise, you have that push-pull of, ‘I want the highest rent,’ or, ‘I want the lowest rent.’ You need a neutral person in that process.”

Expansion gets tougher every day, says Schurr. “If the markets continue to struggle like they are and I get offered another 1,000 acres, I am not sure I would want to do that.”

The future of the family farm is at stake in 2018, says Schurr. “We have to build operations at the scale needed to make a comfortable living. Otherwise, why would kids come back in this tough environment?”

2 DON’T EXPECT THE PROCESS TO BE EASY.
“It used to be simple,” says Moeller. “If you wanted to rent your farm, you went to the neighbor and shook his hand. It’s not possible to do that anymore. Next Gen Ag does the profiling for all the producers who are out there for a particular piece of ground.”

Few landowners sit down with potential tenants and ask the hard questions, says Moeller. “They need to ask, ‘Do you have the money that you can tap into so you can work my farm the way it should be?’ We ask those questions.”

It’s always difficult to meet with a landlord and decide what’s fair, says Schurr. “The market has changed this year. Now we have to negotiate leases for next year. A lot of landowners aren’t informed. They’re going to think, ‘Oh, he’s just trying to drive the price down.’ But a third party can help. I want a long-term relationship where I can make enough money to reinvest in that farm.”

3 PICK LANDLORDS WHO HAVE YOUR VALUES.
When Moeller was looking for someone to take over his farm, his criterion was simple.

“I wanted somebody who cared. A farmer starts with a piece of land, and it’s his baby. He nourishes it; he feeds it; he takes care of it. The last thing he wants to do is hand that baby off to somebody who doesn’t have the same kind of values. By picking an operator like Dan, I don’t lose one minute of sleep about that.”

Each landowner is different, says Schurr. “Some are very focused on dollars. All they care about is what they’re going to gain. For others, conservation practices are important.”

Next Gen Ag has what it calls a Soft Guardianship, says Moeller. “We consummate the match, and then we monitor to make sure standards are hit.”

4 BE FLEXIBLE AND PATIENT.
Moeller suggests considering a flexible lease this year. “That way, nobody feels taken advantage of when the markets move. A flex lease makes for a better relationship going forward.”

Downey, an accredited farm manager, is a fan of flex leases that benefit both parties. “You can be the most producer-friendly farm manager, but there’s always this connotation that you’re creating a divide. Next Gen Ag is an advocate for both the landowner and the producer.”

5 TAKE TIME TO UNDERSTAND THE NEXT GENERATION.
Bohr, who also owns Farm Financial Strategies, Inc., in Lisbon, Iowa, is working with the third generation of some of his original clients.

“The way the next generation thinks and acts is totally different,” he says. “Their parents and grandparents farmed because it’s what they always knew and it was a great place to raise a family. Now, the kids are only going to farm if they can make money. Unfortunately, when we’re trying to lure them to agriculture right now, the cash flow is not there.”

Downey sees some bright spots. “A trend I see from the next generation is excitement to keep the family farm – even if they didn’t grow up on it themselves.”

Bohr agrees. “We see this more in this millennial generation. A lot of them are excited about conservation. That could be a big part of that next generation.”

6 RETHINK TAX STRATEGIES.
Taxes have hurt farm transitions, says Bohr. “Our tax structure combined with a deferral mentality that’s inborn into every farmer has kicked the can down the road. Our system gives a basis step up on all these assets when farmers die. It encourages them to defer it forever. For the kids who get the farm, their incentive is to sell it and walk away. There is no tax consequence of liquidation. That is a problem.”

There is a bottleneck in farming where the older people can’t get out and the younger ones can’t afford to get in, says Bohr. “Farmers would rather cut off their right arm than quit and pay 40% tax to the government. When they die, the kids just liquidate it. Then the small communities evaporate, because schools, banks, and co-ops all depend upon local agriculture.”

Bohr says he knows a dozen farmers in the last year who have been told by their accountants that they need to start paying some income tax. “They would rather fire their accountants,” he says.

7 DON’T PUT OFF THE FARM TRANSITION.
The step-up in basis rewards farmers for plowing all their income back into equity, says Moeller. “All of a sudden, they want to transition to the next generation, and the government points out, ‘Hey, you’ve got all this.’ ”

Schurr’s mother is a spry 86. She owns all the farmland. He has to wait until she dies to transition the farm, and he is 51. “In a normal business, that’s poor planning,” he says.

Schurr has the option to buy the farm at market price, but, “I don’t think I would want to buy right now. In any other business, you would start buying, but the step-up in basis forces you to wait until a person dies. It’s terrible transition planning.”

Now he has a son who wants to return. “Our farm is fairly large, but I think my son might have to have an off-farm job to keep the farm going,” he says.

Bohr says Schurr is the sandwich generation. “We sandwiched you out simply because of the demographics. People are living longer.”

8 REMEMBER THAT LANDOWNERS HAVE TO BENEFIT, TOO.
The matching program is good for the landowner, too, says Bohr. “So many landowners are missing the fact that just because they’re getting a high rent doesn’t mean that’s the best for their land long term.”

In the past, many producers worked with one decision-maker for each farm they rented, says Bohr. Now, they work with three or more heirs for each farm.

“That’s scary, because many states have a default rule. If heirs disagree on how to manage the farm, the default is to auction the land to settle the disagreement,” he says.